How can visual support help children with special needs in their daily lives? 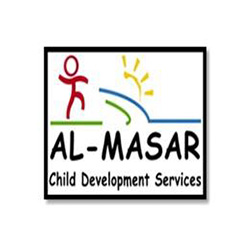 Al Masar Center
Al-Masar Child Development Services was established in 2006 in Amman-Jordan by a group of professionals in the fields of rehabilitation and special ed...More

In our daily lives, we often rely on calendars, mobile phones and lists to help us keep track of events and things to do. Visual supports such as schedules, calendars, and lists are often used with individuals who have special needs.

They are most effective for individuals who have difficulty coping with unstructured activities and benefit from increased structure in their lives, as well as providing them with appropriate positive ways to communicate.

The visual cues can be objects, photographs, drawings, written words, schedules, or lists. Visual supports are very personal and what works for one person may not work for another. Take the person’s special interest, as well as age and potential when designing any visual support. This includes the size and number of photos or objects used.

In the picture above, for younger children the real item is displayed as a cue, and for older children, a photo of the item could be used, while for individuals who can read, the written word is only used on the visual card.

Visual Supports are usually presented in a central location, are made of durable material, and should be clear with no clutter. The photos used in the presented visual support should be consistent in their type or style (for example, line drawings, symbols or photos of persons). Family members, friends, teachers or support workers need to use the same visual supports consistently.

Visual supports could be used at home, at school, in the playground, in the car, at the supermarket,…etc.

Visual supports are used to:

Visual schedules could be individualized for a specific person to perform tasks in a sequence or to complete a specific activity. They could also be for a group of individuals (e.g., for a family or a group of students in a classroom).

An example of an academic schedule: 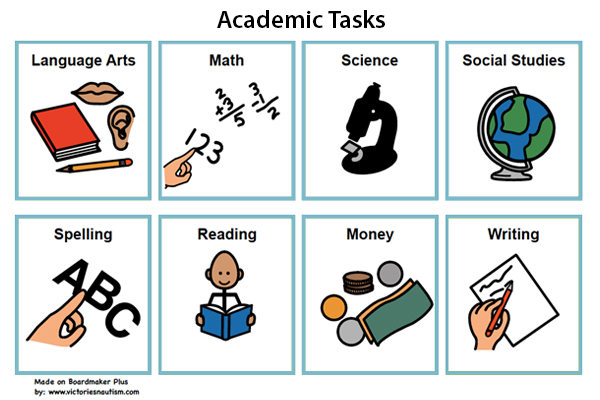 Visual schedules also ease transition from one activity to another, as the person can predict what is coming up, and learns that when one task is done, we move to the other. After the activity or task has been done, the person crosses out the activity/task or puts the picture card in a designated ‘Finished’ container. Another way of indicating that the task/activity has been completed is by flipping the picture card of the completed activity/task.

Visual cues such as a ‘stop’ or ‘wait’ signs placed near the door eases transition.

Color coding could be used to enhance understanding (e.g. green for go, and red for stop).

The schedule can also be portable, for example, on a binder or clipboard, on a mobile phone or an iPad.

Detailed tasks present a schedule of a specific time of the day and are usually mini-schedules outlining the expectations of specific activities. For example, ‘First-Then’ schedules, the morning routine, or after school schedule. 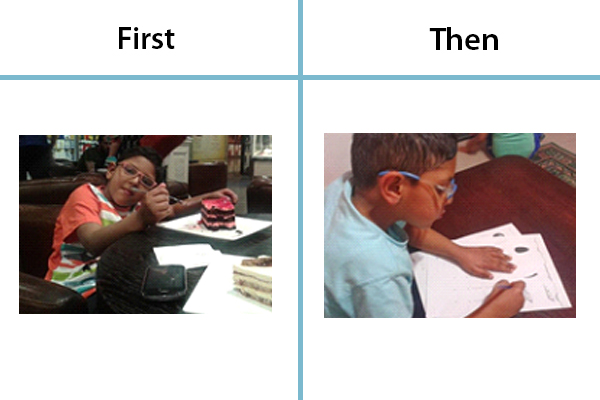 First-then- schedules are used to show what is expected of the person to do first and then what they get to do next.  This is often used when that person is not fond of a task, so that task is presented first and then it is followed by a desired activity that the person is fond of.

A schedule for bedtime routine might include the following steps: take a bath, brush teeth, put on pajamas, read a story, say good night.

The kind of photos used within the schedule depend on the style of photos that are used in the other visual supports (e.g. line drawings, symbols or photos of persons).

If a person is having difficulty with one step of washing hands for example, we can divide those steps into more details as follows. 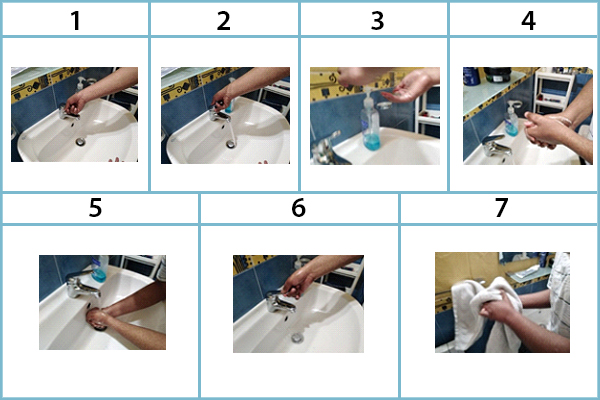 Task analysis for threading a button: 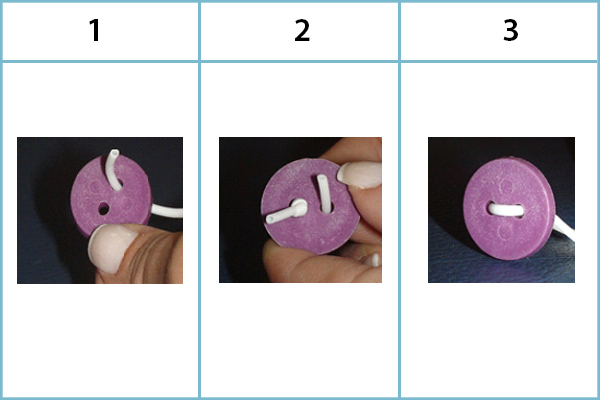 Steps to assemble the design 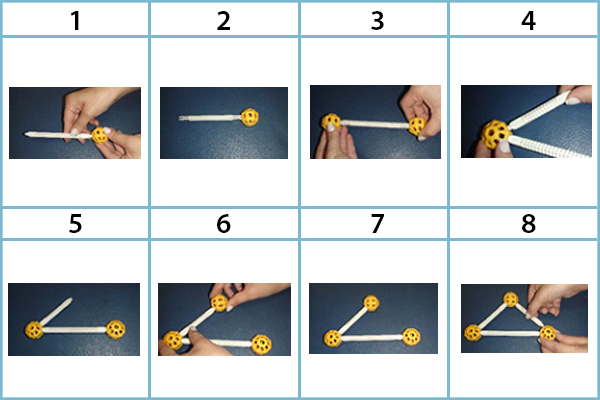 Individuals who have challenges in interacting, using language, and having limited interests or repetitive behaviors can benefit from visual supports. Visual supports may help those individuals in understanding social cues as they interact with others in daily activities.

Visual supports will lead an individual into starting a conversation, responding appropriately when others make social approaches, or changing behavior based on unspoken social rules.

Visual supports will aid parents to communicate what they expect. This decreases frustration and may help decrease problem behaviors that result from difficulty in communicating. Examples of systems used for communication are the Picture Exchange Communication System (PECS), and the Prolaquo2Go application (Augmentative and Alternative Communication).

As described above, visual supports are very helpful in reducing anxiety as they add predictability to the daily routine and prevent challenging behaviors. Accordingly, they promote independence, ensure success and ease transitions.